The Osprey (Pandion haliaetus) — also called fish eagle, sea hawk, river hawk, and fish hawk, stands 60 cm tall with a wingspan up to 1.8 metre long and weighs around 7kg. Females are slightly larger than males and both parents can live for 7-10 years.  They’re brown on upperparts and predominantly greyish on the head and underparts. Despite its propensity to nest near water, the osprey is not classed as a sea eagle.

Fish make up 99% of the osprey’s diet. It typically takes fish weighing 150–300g and about 25–35 cm in length (about the size of your arm from wrist to elbow). Virtually any type of fish in that size range are taken. Ospreys can be found worldwide and are migratory, i.e. they follow the seasons that suit their lifestyle. Some will breed in Scotland in springtime and once the juveniles are ready, the birds will leave for West Africa. Similar migratory route happen around the world.

Ospreys are sexually mature at three to four years of age. They pair for life, though if one dies, a replacement can occur quickly.

Here are a few of my photographs of the ospreys taken at Rothimurcus, Scotland in July 2017. I do hope they inspire you to study these magnificent birds-of-prey and take similar photographs of your own. 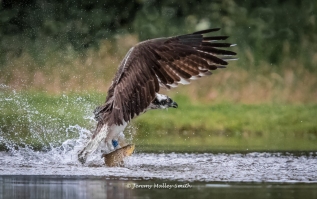 Emerging with the trout 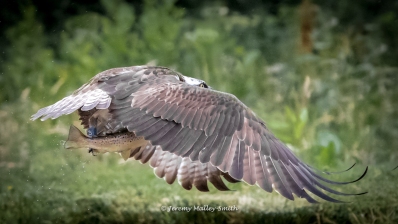 Osprey with head down 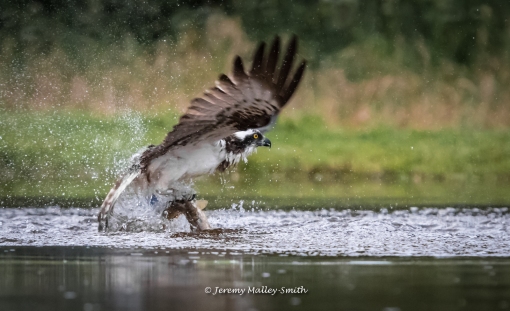 Coming out of the water 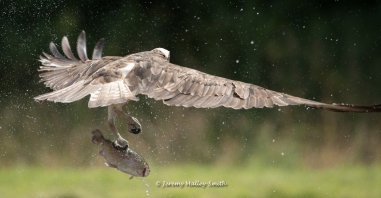 Coming out of the water – 2